﻿ ﻿ After a season on the road which included six round-trips to Toronto and two to their “home” venue in Ottawa, the Québec Saints have repeated as Division 2 Premiers in the Ontario Australian Football League. The kilometres travelled were well worth the celebration as the newest Club in Canada – sporting a roster containing only five of last year's premiership players – convincingly outplayed the Toronto Central Blues in what proved a hard-fought and remarkably intense encounter.


Both teams made several changes for the decider. For the Blues, tall midfielder Carl Hastrich proved the major inclusion while the Montréalers welcomed back four who missed the Semi-final due to injury; the erratic but athletic Nico Pouessel, tough-as-nails defender Lachie Trumble, playmaker Kyle Graham and big man James-Robert Theis.

The Blues, who many tipped at the beginning of the season to win the division, were ultimately unable to repel the forward-sweeping forays of the Saints. Early in the first term it became apparent that the Saints were more adept in the wet, greasy conditions and were playing high on confidence after their ten-goal Second Semi-final win against Central. Even with the Blues playing a loose man in defence for the majority of the quarter the ball remained in the Blues' defensive half with the Saints half-back line pushing up and preventing the ball being moved into the Blues forward zone; with Trumble and “Eddy Baby” Duff marshaling the defence, the Blues forwards looked overmatched and unable to stamp their influence on the game.


The Saints though were unable to convert their midfield dominance and forward pressure into a sizable lead on the scoreboard; the first goal came at the ten minute mark when Pouessel snapped truly from twenty-five metres. Although they ended the quarter with only the one major, the Saints looked confident moving into the second term as Darrin Haverhoek was typically effective at the contest and able to get free into open spaces in order to use his devastating footskills. As per usual, Ryan Oxley set the tone for the Québec side with his willingness to put his head over the ball and make the extra handpass.
The second quarter was astonishingly similar to the first. After his sublime performance as a leading forward in the Second Semi, captain Mat Wilson found himself subdued early by the double-teaming Blues defenders. This in turn left Theis and the late-arriving Cam Beaman single-covered and the half-forward line became the strength the Saints set about exploiting. Big Jim was superb in retrieving the contested ball and while Beaman didn't take the marks that have put him among the division’s Best & Fairest top vote-winners, he provided a strong body and won the ball often at ground level, while frequently being the target of several high contacts. Excellent forward pressure came from Dan Barker and Mark Morin, while Duff, Greg Brétière and Jason Hodgson in the backline had the measure of their Central opponents. Again the Saints were inaccurate – and occasionally selfish – in front of goal but they managed another major through Theis and the favourites went into half-time up 2.6 to 0.1.
The Premiership Quarter belonged to the Province of Québec. The Blues tried valiantly to even up the midfield matchups in the third quarter, but to no avail. Although coming off a down year, ruckman Matt Wood used deft touches to bring Graham, Pouessel and Haverhoek first use of the ball. They found the mad Irishman Ronan Shaughnessy and Oxley willing targets on the wings that then proceeded to tear the Central defence to shreds with raking, accurate entries into the forward 50. Confident they'd quelled Wilson, Blues coach Jaye Macumber chose to double-team the dangerous Beaman and almost instantly the Saints found Wilson leading strongly three times for two Captain's conversions. Shaughnessy then kicked the goal of the day while trapped in the right forward pocket, slotting it through after shrugging off two tackles. After weeks of stressing the importance of shepherding and protecting the ball carrier, the Blues were clearly unable to cope with the work ethic of a Saints team who for most of the season have looked much more comfortable offensively than defensively. The Premiership Quarter produced five Saints goals to one.
As the teams broke for three quarter time, the Blues were obviously rattled. They'd kicked one goal for the match via a 50-metre penalty and were looking very ragged. One of the Saints' bright hopes for the future Chris Lagace came into the game in the second half as a sweeper and was able to produce run and stability from half-back. As the minutes ticked away, the Saints coaches were able to relax until the final siren sounded with the Saints victorious 9.7.61 to 2.1.13. Haverhoek’s tireless performance on the ball saw him voted the Best on Ground, while retiring Coach and Administrator couple Luke and Dani Anderson were fittingly chaired from the field.
Québec Saints AFC   1.4  2.6  7.7  9.7  (61)
Central Blues AFC     0.0  0.1  1.1  2.1  (13) 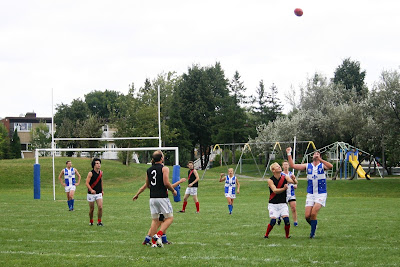 Laval Bombers    2.2   5.7     7.9     14.12  (96)
Montreal Saints   5.2   7.5   10.11   13.12  (90)
Goals-Bombers: D.Barker 6, L.Anderson 3, D.Haverhoek 2, A.Huggett 1, L.Belzie 1, D.Wilson 1.
Saints: M.Lacy 6, M.Morin 5, R.Shuaghnessy 2﻿
The 2010 ECAFL season had been one of highs and lows for all teams, but heading into the cut throat semi-final one statistic had been constant, the Saints had yet to topple the Laval Bombers all season. The Bombers were as close to full strength as they could hope. The only absentees would be the retired former premiership coach/full-forward Shane Blight and versatile ruckman/defender Renaud Carbonnel who had missed the entire season with a lower body injury. The Saints welcomed back Mick Lacy but the losses of Heath and Ferreri had created a massive void through the midfield, one Kyle Graham had filled to perfection. But the Saints wouldn't have the luxury of the Canadian sensation in the squad come game time, the last minute inclusion of Ronan Shaughnessy a godsend for the Montreal team.

The siren sounded to start the 2010 Finals series, prize for the winner - a spot at premiership glory.

The Saints won the early ball and the first battle of minds by playing spearhead Mat Wilson as a defensive midfielder. The move relied heavily on the Saints finding another target up forward, Mick Lacy was the nominated man but it was his sidekick Mark 'Slim Shady' Morin who would steal the show. Morin had kicked just two goals for the entire season but in a career best performance #88 duck weaved his way to three first quarter goals, Lacy would add two and the Saints equalled an ECAFL record opening term by kicking 5.2 to lead the Bombers by 18 points.

The Saints had benefited from a slight breeze in the first. The Bombers were eager to square the ledger and on the back of midfielders Stark and Haverhoek went about doing just that. The Bombers rising to the challenge controlled the play but with Wilson and 'Smash' Gasperino partolling the Saints backline were unable to capatilize on their good work. Bomber goal sneak Daniel Barker slotted two for the quarter and Dave Wilson one but the 5 behinds to the Bombers were a sign of wasted opportunities. The Saints countering with Mick Lacy's third of the afternoon and Shaughnessy's first to maintain the lead heading into half-time 10 points up.

The Premiership quarter. Huggett had been galant against Saints towering ruckman Wood while Aimee Legault had proved a livewire for the Saints midfield thus far. Wood continued the good work in the third and began working forward and presenting as a target. The Saints dominated the quarter with 9 scoring shots to 4, but like the Laval team the previous quarter were unable to gain maximum effect on the scoreboard. Morin added goal numbers 4 and 5 for the day and Lacy number 4 but the Saints but of the 9 shots those were the only three that were majors. Anderson and Haverhoek registering goals for the Bombers and giving the reigning premiers an outside chance, the Saints 10.11 (71) leading the Bombers 7.9 (51) at the last change. 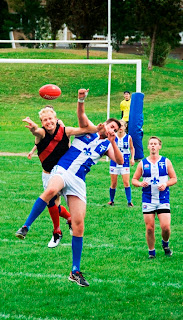 The Bombers knew with the wind at their backs in the final term anything was possible. Every player for both teams lifted their intensity as the game resembled two champion boxers, out on their feet trading blows. The quarter began to mirror the past two as the team with the breeze controlled a majority of the play. The difference only being that this time the Bombers were scoring goals instead of behinds. While the Saints avenue to goal had been dominated by two players the red and black army embraced and all-out attack. And it was working. A flurry of quick goals brought the Bombers to within a kick, and after a miracle Barker goal from hard up in the right hand pocket the Bombers had a sniff of a come from behind victory. Huggett, Belzie, Anderson, Barker and Haverhoek would all score goals for the Bombers in the all out assault, 7 goals in total snatching a 6 point lead late in the match from the Saints who had managed three, once again through Lacy and Morin. The siren brought to a close one of the best ECAFL matches ever played, the Bombers scraping home in sensational fashion by a single goal.
Posted by Neotraveler5 at 7:51 PM No comments: